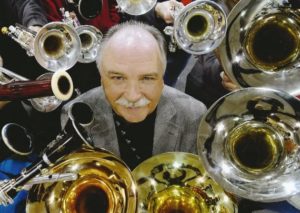 Retired after 37 years of experience as a successful band director in Alabama public schools, Mr. McAfee completed his career as band director at the award-winning Hoover High School. His bands consistently received superior ratings on both the concert stage and the marching field and performed in many prestigious events both in the United States and abroad. Mr. McAfee received his Bachelor of Music Degree from the University of Montevallo and earned a Master of Science Degree at the University of Illinois placing emphasis on instrumental conducting and band literature. Mr. McAfee served the Alabama Bandmasters as Vice-Chairman and Chairman of District IV, as Vice President and President of ABA, and for 9 years as the Executive Secretary. He retired from the U.S. Army Reserve after 26 years of meritorious service with the 313th Army Band. In retirement, Mr. McAfee continues to teach private trumpet students and sectionals in Birmingham area middle schools as well as observing intern teachers for the University of Alabama Music Department. He also serves as an adjudicator and guest clinician around Alabama and southern states.

Memberships include the Alabama Music Educators, National Association for Music Education, The National Band Association, The International Trumpet Guild, and Phi Beta Mu Honorary Band Directors Fraternity. Mr. McAfee now serves as conductor for the Birmingham Community Concert Band. He also plays principal trumpet with the Alabama Winds and the Celebration Winds community bands. Active with the American Federation of Musicians Union, he plays local shows, church and freelance work. He is also a member and director of the orchestra at Metropolitan Church of God. Mr. McAfee and his wife, Amy, have two daughters, Kate, who recently graduated from the University of Alabama with a degree in psychology and Erin, who also attends the University of Alabama pursuing a flute performance career.